‘We must be prepared to deal with the problem of violent picketing … The only way to do this is to have a large, mobile squad of police who are equipped and prepared to uphold the law against the likes of the Saltley Coke-works mob.’

ACPO, ‘Policing Arrangements of the National Union of Mineworkers Dispute’, 1985

The 1980s marked a militarisation of the British police. Utilising the building blocks which had been laid in the 1970s, the Association of Chief Police Officers (ACPO) studied the early 1980s urban riots and tested its assortment of new tactics and institutions fully during the 1984-1985 Miners’ Strike. The lessons ACPO drew from the Miners’ Strike would help propel the Association closer to establishing the National Public Order Intelligence Unit (NPOIU), the UK-wide undercover infiltration squad founded in 1999.

In Bristol, then Brixton a year later, spreading to Southall, Toxteth, Moss Side and 30 other towns and cities, young people – often ethnic minorities – vented their anger at police in sustained confrontations during the first two years of the 1980s. Unemployment, racism and heavy police harassment all contributed to the combustion. Police forces were temporarily forced out of whole neighbourhoods and, as a report from the Institute of Race Relations put it shortly afterwards, ‘police capacity was stretched to its limits … The actions of black youth on the streets destroyed at a stroke the myth of police invincibility’.[1] ‘The police system of “mutual aid” … was in tatters, so widespread was the “rioting”’.[2] 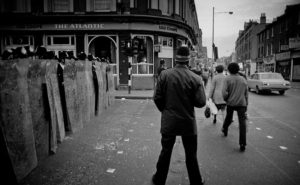 The experience made a deep mark upon the police service, and ACPO was determined to do what it could to prevent a repeat. As the ACPO Training Committee put it in 1987, ‘Riot is distinct from other crime, representing open and sustained hostility to law enforcement and can be said to be the ultimate test of policing’. In 1990, a video of the riots was still being played at an ACPO conference to instil fear in the attendant chief police officers.

Through their spontaneity, militancy and unpredictability, the uprisings of marginalised black and other working class people struck fear in the heart of the police and spurred further innovations in public order management and riot control. In 1986, Chief Constable of Humberside Police, David Hall, stated in an internal ACPO report: ‘New strategies and new tactics had to be devised … the need for flexibility and adaptation was a strong feature of national contingency plans. The street disorders of 1981 were the catalyst for a new approach to policing disorder‘.

Three substantial changes and innovations emerged as a result of the 1981 outbreaks: i) the system for establishing a National Reporting Centre (NRC) to coordinate police mutual aid was solidified, ii) training packages to ‘deal with inner-city disorder’ and ‘facilitate mutual aid’ were prepared, and iii) most infamously, the ACPO Public Order Manual of Tactical Options and Related Matters was created and disseminated.

The NRC, which had been initiated following the 1972 miners’ strikes and tested during the NUM’s 1974 and prison officers’ 1980 strikes, assumed greater importance. Essential for assessing where police were needed during cross-force national-level uprisings and strikes, it was agreed after the 1981 riots by ACPO and the Home Office ‘that the Centre should be placed on a more permanent footing’.

Simultaneously, a new training programme essentially generated a modern riot control police in Britain. By 1990, a ‘staggering’ amount of 191,038 ‘man training days’ per year were dedicated to the programme. As one ACPO document notes, police public order training in nearly all forces throughout the 1980s was ‘based on’ the Public Order Manual’s contents.

This manual, drawn in large part from crowd control techniques perfected in colonial Hong Kong and Northern Ireland, proposed paramilitary tactics including horse charges, collective police chants, ‘snatch squads’ and CS gas. As one major study of the manual recognised in 1989, ‘the last stages of training in the new public order tactics were completed in 1984. They were almost perfectly on cue for the first test of their effectiveness in Britain, which was not to suppress a riot but to defeat a mass picket of coal miners’.[3]

D Hall, the Chief Constable of Humberside Police, reflected on the policing of the Miners’ Strike in a 1986 report for ACPO:

Coaling mining has been an important barometer... (p. 3)
View entire document on DocumentCloud

The strike offered a baptism of fire for the new police tactics developed in the wake of the 1980-81 riots, and, from the police perspective, they turned out to be a success.

‘Two factors in particular enabled the police to make an effective response to the challenge posed by the dispute’, Hall argued: ‘First, the NRC [National Reporting Centre]. Second, the tactical planning and training which had taken place following the inner city riots of 1981’.

The NRC faced its biggest trial during the strike, and came under public scrutiny for the first time. As Hall put it, ‘The ability of forces to aid each other after maximising the use of their own officers was the cornerstone of the police operation’. The final 1986 ACPO report on the conflict concurred: ‘The availability of that [mutual] aid, with so many forces making requests, was often critical’. The NRC coordinated the deployment of around 4,000-8,000 officers per day during the dispute.[4] The most decisive police victory occurred at Orgreave coking plant on June 18, 1984, when thousands of cops broke the mass picket in harsh fashion, preventing a repeat of the NUM’s flying success at Satley in 1972. The Orgreave Truth and Justice Campaign is still waiting for an independent inquiry.

Following the defeat of the strike, a formal ‘ACPO Review of the NUM Dispute’ was carried out into the lessons the police service could draw from the events. The review’s recommendations centred on expanding the police’s national intelligence gathering capabilities.

Shortly after the dispute ended, the President of ACPO recommended that all forces establish their own ‘Operational Intelligence Unit’ which could be quickly activated at the earliest signs of future unrest. Based on the success of the Central Intelligence Unit set up in Leicester during the dispute, a 1986 records notes that, ‘In some Forces, because of the constant high incidence of industrial action, racial unrest or public disorder, there would be the need for a permanent Unit’. The units were to include ‘Field Intelligence Officers’ whose tasks encompassed the ‘Cultivation of informants with a view to obtaining high quality relevant information’.

Most crucially, the reports emanating from the ACPO Review of the NUM Dispute recommended the establishment of a ‘National Intelligence Office’ (NIO) which ‘should encompass a permanent facility for monitoring’ ‘major outbreaks of disruptive and criminal activity’. Included in the NIO’s proposed purview were ‘animal rights activities’, ‘the activities of Anarchist Groups’, ‘“Peace Convoy” and other similar group activity’, and ‘matters concerning social and industrial disorder‘. ‘An intelligence unit dealing with such matters must be operating’, the report argued, ‘even at low key, constantly so that information indicators can be received and processed’.

This principle would later inform the infamous National Public Order Intelligence Unit (the ACPO unit which ran dozens of undercover officers through the 2000s): all groups, no matter how small, must be monitored – and later penetrated – to ensure that any signs of large-scale unrest can be spotted, isolated and prohibited before they develop.

Placing the system within the context of Britain’s political policing apparatus, the report argued that, ‘Special Branch involvement is essential to ensure proper analysis of information within the context of Special Branch records and adequate liaison with the Security Service’. The kind of information the new office would be required to gather included personal details, associates and groups (including for those who had not been arrested), vehicle details, telephone numbers, nick names, and radio call signs.

The proposals intersected with a new national intelligence unit which had been set up in January 1986: the Animal Rights National Index (ARNI). The ARNI, part of the Metropolitan Police’s Special Branch and funded by the Home Office, was initially created to monitor animal liberation activists before being collapsed into the NPOIU in 1999. Commenting on the Index’s existence, one report from the ACPO Review argued:

All national functions should be integrated... (p. 7)
View entire document on DocumentCloud

It is not clear from the documents whether the NIO was set up when it was first discussed in the mid-1980s. A 1987 report on the progress being made to implement the recommendations complained that the NIO had still not been established. The report also noted that the proposed unit was not supposed ‘to infiltrate organisations of whatever persuasion‘, suggesting that the provision for a nation-wide undercover infiltration unit was not being seriously considered at this point by ACPO.

That ACPO was bemoaning the insufficiency of the ARNI as a method of national political intelligence gathering as early as 1986 raises the question: why did it seemingly take until 1999 for a truly national public order intelligence unit to be established?

Part of the reason seems to be that the ARNI was expanded and reshaped to partly fulfil that role as time went on. A 1998 document from the Metropolitan Police Public Order Operational Command Unit stated that, by the late 90s, the name of the ARNI was ‘inaccurate’, noting that ‘its skills and methods are now being applied in public order areas … beyond its fairly narrow original remit’.  If so, the ACPO recommendation for a nation-wide police intelligence unit coming off the back of the Miners’ Strike may have emerged earlier than we previously thought. The general development of such a system from 1986-1999 remains largely unknown: the available archival information is presented in part 3.

Connor Woodman carried out this research whilst the 2017/18 Amiel & Melburn Trust Research Fellow, hosted by the Centre for Crime and Justice Studies. Connor is the author of the Spycops in Context publications, analysing the undercover policing of political groups. Thank you to the Hull History Centre and Jim Townsend for their assistance during the research phase of this project.